What Do Christians Think About Fossils?

The age of the earth is a stumbling block to many and causes doubt to the accuracy of the Bible. We are taught in school that the earth formed billions of years ago and this information is fed through the tube, also known as the television. Many will point to fossils as a point to prove such a case.

We know that unbelievers will state that science has carried out tests to prove the age of the earth. Looking back in time people would have said the same thing and in the future, this date will change.

Fossils take many years to form, don’t they?  Most people, therefore, seem to have the preconception that it takes a great number of years.  However, what does the mainstream say about the formation of fossils – Let’s take a look for instance at what the web’s favorite site for information, Wikipedia;

Wikipedia ‘Paleontology is the study of fossils: their age, method of formation, and evolutionary significance. Specimens are usually considered to be fossils if they are over 10,000 years old.  The oldest fossils are around 3.48 billion years old to 4.1 billion years old.’

But how do they calculate the age of the fossils? The modern way to test is with radiometric dating. The age of the earth is calculated in the same way as they do for fossils and they state that fossils are over 10,000 years old.

If we only look at this data, we are inclined to think that these dates are given to be facts. The case for young-earth only has a small voice and the mainstream is dominated by scientific ‘theories’.

There are some Bible believers that go along with the scientific dating of the age of the earth, but with a strong belief, we hold onto the word of God. As believers, we see God as truth and Satan as the deceiver.

Psalm 119:160 The sum of your word is truth, and every one of your righteous rules endures forever.

The Bible dates the age of the earth to be around 6,000 years old. This calculated using history and chronology back to Adam. Throughout the Bible, we find family lineages and we are given the age they live till. These details can seem unnecessary to some, but they tell us when events occurred and show a timeline of history. The Bible is not only a book of wisdom and prophecy, but it is also historical.

The Age of Fossils

In a small town in the north of England, just west of York, Knaresborough there is a beautiful spot that attracts many tourists each year. It is home to a waterfall that is rich in minerals, with a high concentration of calcium carbonate.

The place is known as the Petrifying Well at Knaresborough and is home to items that dangle from the rockface, they hang underneath the dripping fall. The items range from teddy bears to teapots.

It may seem like an odd place to hang your wears, but there is a good reason for it. People are forming fossils out of modern-day items!

The common thought and belief are that it takes thousands, millions, and billions of years to form a fossil. 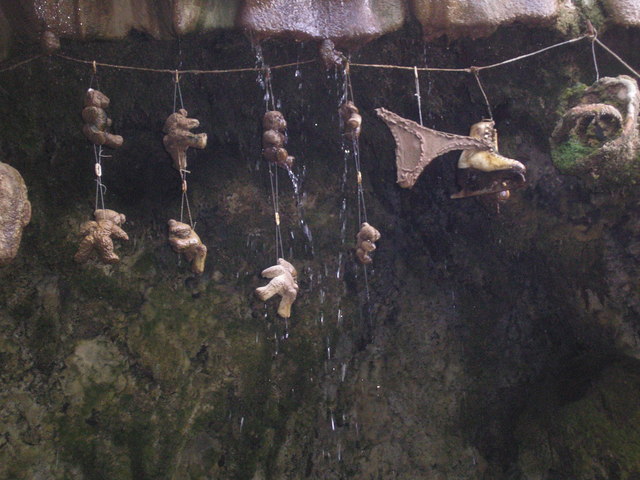 Therefore let’s take a look at this teddy bear, it’s fossilized and it does not look like it was made thousands of years ago.  So how old is this teddy bear? He’s only a young pup, anywhere between the age of three to five months – that’s how long it took to turn him to stone!

This picture was taken underneath a waterfall in Yorkshire, England, and many objects are placed on a line underneath to collect the mineral of calcium carbonate, this, in turn, forms the objects into a solid form.  Above all, any small object takes only a few months to form and larger ones can take up to two years.

Contrary to reports in the mainstream that it takes more than 10,000 years to form a fossil, this evidence proves otherwise. We can safely say without any doubt, fossils are formed from 3 months onwards, depending on the concentration of minerals.

People will then point out to say, well if fossils are young, what about dinosaurs? And some will add, there are no dinosaurs in the Bible. The book of Job that was written before 2100 BC and there is mention of a dinosaur-like creature;

Job 40.15-19 15 “Look at Behemoth, which I made along with you and which feeds on grass like an ox. 16 What strength it has in its loins, what power in the muscles of its belly! 17 Its tail sways like a cedar; the sinews of its thighs are close-knit. 18 Its bones are tubes of bronze, its limbs like rods of iron. 19 It ranks first among the works of God, yet its Maker can approach it with his sword.

This is just one example of an animal in the Bible, that is not found today.

Cedar trees range from 120 to 180 feet. Animals with a tail like this are no sloth. Recent evidence goes against the age of dinosaurs and can be read in my article here.

As a Bible believer, I stand firm to the word of God. There will be instances in science, that will rock people’s beliefs. The only rock that we should cling to, is that of Jesus Christ.

Deuteronomy 32.4 He is the Rock, His work is perfect;

For all His ways are justice,

A God of truth and without injustice;

Righteous and upright is He.

We’ll often hear the words, hypothesized, estimated and theory. When we do, it should ring alarm bells to the truth. As we progress into this age of Scientism, these words are even left out, but the phrase evolution should always end with the word theory.

Hats off to these modern-day fossils, that show more evidence to prove that things we thought were many years old, are conclusively younger than first thought.

“The grass withers, the flower fades; but the word of our God stands forever.”
Isaiah
40.8